Thanks for not reading the Rocky Mountain News. Thank you Rocky Mountain residents, for chilling out and not generating much news. When the paper closed, two former employees took a punt on a 20-gallon home-brew kit and a beery dream. Strange was born.

There are eleven beers detailed on their website, but no mention of the watermelon bomb I tried in July 2013. They also say they close at 9 though, so I don’t know what to believe. The Strange Pale Ale was also good, and I’d already had a Pliny the Elder that night to which it was inevitably compared. 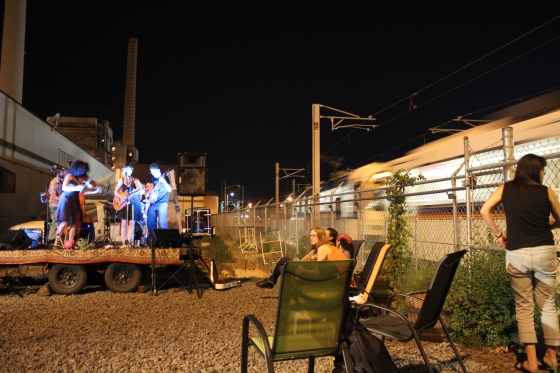 The Strange Brewing Company is really well hidden in an unremarkable industrial area of Denver. All chipboard and business inside, the decor is a stark contrast to the effort made by bars this side of the pond to create an homely, affable vibe. But, despite their decorators best efforts, or in spite of them, they have created a brilliant atmosphere. I loved it. I was also on my nth ±6 beer when arriving, so make of that what you may.

That really is where it is.

There was some kind of bluegrass yokel band swinging on a trailer in the garden which, given the location, was disturbing no one.

The bar really is the brewery- the garden is reached by walking through a room full of brewing vats.

The (temporary?) watermelon beer is perhaps the best fruit beer ever.